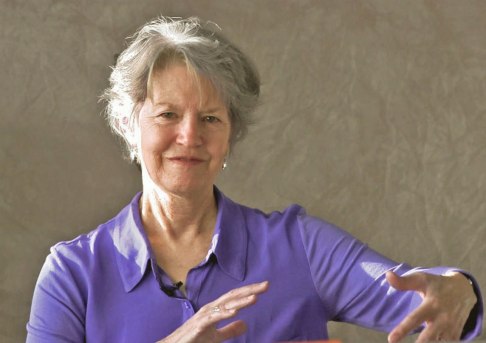 When a near stranger asked Patty Wipfler this very simple question, her entire life changed. Thank you Patty for being my first guest blogger and sharing this amazing story! I know that thousands of parents have benefited from your discovery that listening to tears changes everything.

Soon after the arrival of my second child, I became a stressed-out mom. I didn’t think of myself that way at all, but what I did know was that I was beginning to have moments of anger. The day I almost threw my two-year-old against the wall – I stopped myself, but just – I knew that there was something very wrong. I’d vowed not to be violent and angry like my father had been, but here I was, angry and almost violent, not just once, but again and again.

I began wondering what to do to change the course of things. I thought it was something I had to figure out for myself, but no solution came. I didn’t even tell my husband that I was losing my self-control. Then one day a casual acquaintance asked me, ”what’s it like to be a mom?” and I looked at her and burst into sobs. I cried hard for a good fifteen minutes, right there with an almost total stranger. i remember every minute of that cry- what I thought, how I felt and what I told her. She listened. She was kind, but not worried. She didn’t give me advice or seem at all shocked. When I could stop sobbing, I apologised; she told me that I had done exactly what I needed to do. That crying would help, and that she’d been learning how to listen, so people could release their upsets this way, and function better afterwards.

After that big cry, I went back to my children and everything was different. My patience returned. I felt so much better about myself and about them. I wasn’t harsh with them in the least for many weeks to come. I asked her more about what she knew about listening, and found out that she was part of a group in which people helped one another by exchanging listening time.

So I began taking classes where I learned to listen, simply listen, to another parent, and then have that parent listen to me. No advice. No judgement. All confidential. A simple exchange. I found it to be a powerful way to lower the stress of parenting my sons. I found that every time my listening partner and I met, we connected on a deeper level, I learned more about myself, and I gained the safety to reach down and actually feel and release hurt from my childhood. I found that he, too, was helped by my attention, nothing more. I cried about the people I loved and the hurtful things that had happened. He, more scared than sad, trembled much of the time. I laughed, too, as I ventured to tell my listening partner about feelings and experiences I’d kept to myself for so many years. it was a compelling relationship, and utterly simple.

Early in this exploration, I had an experience that took my breath away. My two-year-old son Jacob had come down with pinkeye. Both of his eyes were crusty and oozing. The doctor prescribed eye drops to be given for several days. But Jacob was not yet three, and, knowing him, I was sure he would be frightened. How would I get those drops into his eyes? I envisioned having to pin his arms down with my knees and lean, dropped in hand, over his struggling body. If it went that way, I would be required to undermine his trust in me three times a day for several days.

When David, the baby, went down for his nap, I decided to try listening to Jacob’s feelings about getting drops in his eyes. Perhaps that could help. I had no idea how, but what was there to lose? I showed him the bottle of drops, and told him I needed to put some in each eye. He threw himself back on the bed, and cried, hard. I listened intently, right next to him. I told him the drops would help him get better. He kept crying. When he would slow down, I’d lift him gently up to a sitting position, show him the bottle again, and say, ”I need to put these in your eyes. It’s going to help you.” And every time he cried hard. I listened.

After about a half hour of this back-and-forth, I asked him if he wanted to see how the drops were squeezed out. He did. I filled the dropper, raised it and squeezed drops back into the bottle. He watched, and then threw himself back on the bed for more hard crying. it went on like this for a while – demonstration, crying; demonstration, crying – and somehow, his brother kept sleeping. I wondered how (and when!) this would resolve: there were certainly a lot of feelings on tap! And I had to get the drops in somehow. Then, Jacob asked whether he could try squeezing the dropper, and I said, ”Of course.” He tried it several times, and then I asked if he was ready for me to put the drops in his eyes. He wailed. he threw himself back and put everything he had into this outburst. I kept listening.

A few minutes later, his face cleared, he sat up, and he asked, ”Can I put them in? In a hundred years, I wouldn’t have thought of a two-year-old giving himself eye drops! I said, ”Sure, you can try. If you miss, I’ll have to help, though.” I asked him to lie down, and filled the dropper. I helped him position his hand over his eye. And I watched as he squeezed two drops into his open eye. He did the same for his other eye, then sat up, looked at me and grinned, and ran off to play. He was fine, and I was astonished! Putting drops in his eyes was as ordinary as putting socks on his feet after that. His fear had vanished.

Many things came together that day. I’d grown up with really good parents who stress level had gone beyond the beyond. I had seen the world of hurt a good parent under stress could cause. But if a parent had an emotional outlet, a safe connection with a listener, that kind of hurt could be prevented. And families could be warmer and closer, as ours had become. When I saw my son take charge of his treatment that day, it became clear that parents didn’t have to dominate their children. They could trust their child, set necessary expectations, listen and connect and the child would thrive. Offering connection through listening was a way of giving that was powerful and respectful, and in the end, it got things done. It felt great to parent this way- working with a child’s big feelings, rather than against them. Giving myself, my attention, my offer of connection, rather than words, bribes, or demands. I knew what I wanted to do with my life.

You can try this today!

Think of a friend or acquaintance who you trust that you could talk to about how your life really is without censoring yourself. Arrange to have 10 minutes in person or on the phone, away from distractions and responsibilities. Simply ask each other, ‘How’s Parenting Going?” and take a five minute turn each to talk, while the other person listens with judgement or giving advice. You can talk laugh or cry, and find some renewed energy and patience for parenting. I’d love to hear how it goes!

Hand in Hand Parenting publishes a pdf booklet with full details of how to do listening partnerships. It contains all of Patty Wipfler’s wisdom from thousands of hours spent listening to and supporting parents.  You can find it in the Hand in Hand parenting store here Hand in Hand also offers courses (in person and online) where you can have listening time with experienced instructors. More details here